The Plaza Theatre at Laurieton was built in 1959, before this date films were exhibited across the road in the School of Arts hall.

Baz Luhrmann's father was the projectionist in the early 70's, and this is the point in Baz's life where he was bitten by the motion picture industry bug. Of course the rest is history.

In 1999 David McGowan purchased the freehold and set about bringing the past movie exhibition standards back to life. David grew up in the film business, operating cinemas in Queensland regional and suburban during the 60's and 70's. Mindfull of his training with Hoyts and Greater Union cinemas in the 60's, he set about re birthing the Laurieton Plaza Theatre to what it is today. 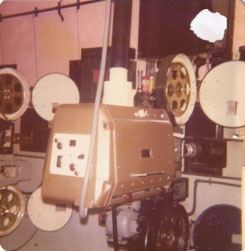 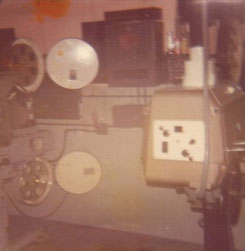 A VISIT TO THE PLAZA THEATRE IS A REAL STEP BACK IN TIME. Pictured is the Original projection equipment.

Click newspaper image to view an enlargement of the news article 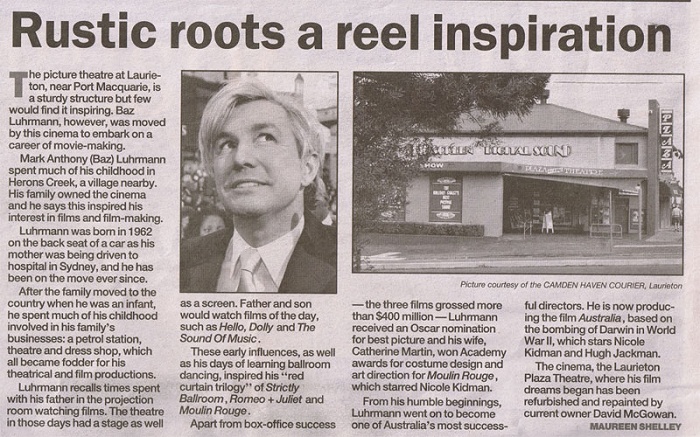 Laurieton is a small fishing village situated on the north coast of NSW, about a four hour trip from Sydney. Hardly a place where Hollywood celebrities would drop in unexpectedly! ........ Read more

A NEW AND DIFFERENT WAY TO SEE AND HEAR NEW MOVIE REVIEWS WORLD-WIDE AT www.mabhollywood.com AND ON THE BIG SCREEN IN AUSTRALIA

Matías Bombal has contributed to Northern California’s entertainment world in many different ways over the years.  He’s been a movie exhibitor, TV broadcaster, radio host/announcer, voice over artist, and historian.  Last year, he launched the new movie review web site, www.mabhollywood.com.  This year it goes to the big screen in theatres in Australia.  The Plaza Theatre is the very first to add Matias Bombal’s reviews to pre-feature on screen entertainment in place of, or augmenting previews of coming attractions on movie screens with brilliant 2K digital theatrical projection .  Negotiations are now beginning for the same service to theatres in the UK and New Zealand and other English speaking nations.

Mr. Bombal was instrumental in the re-opening of Sacramento, California’s 1949 Crest Theatre in 1986. He championed many other California movie houses as well, such as The Tower, Guild and Colonial in Sacramento, and the magnificent 1931 Paramount Theatre in Oakland.  He introduced movies on TV-58 for a 3 year period on Sunday nights in the early 1990’s.  He also worked in radio in Oregon and Sacramento, where his “Classic Jazz and Swing” program was heard on several stations of Capital Public Radio, the Northern California NPR affiliate for 4 years.   He is often seen and heard as a Master of Ceremonies at many events, such as the Courtyard Classic Film Series at the Crocker Art Museum and the Sacramento Music Festival.

With the changes in technology eliminating many of the professional skill sets that existed in the era when movies were shown in theatres on motion picture film, or for that matter, vintage music on broadcast radio stations, Mr. Bombal has embraced new technology and modern communication techniques to share his great knowledge of the movie industry’s past in a modern way with “Matías Bombal’s Hollywood”, which may be seen and heard at www.mabhollywood.com from anyplace on the globe.  Combining his passion for old radio and movies, he addresses the viewer from the set of a vintage radio studio and talks about NEW movies in current release.  It’s as if the viewer is his guest in an old radio studio watching his “radio broadcast” where he talks about the latest releases currently in theatres, and a clip or two from the movie reviewed is also shown in its correct aspect ratio and sound format.   Web analytics and Australian theatre audiences in independent theatres prove there now are returning viewers from all over the world and across the United States, as most first run films open everywhere on the same date, which makes this a website of interest to movie fans everywhere, not just where the website originates.

“Matías Bombal’s Hollywood” is photographed in High Definition and offers at least one new review of a current release each week, sometimes more.  His style of presentation is refreshingly opposite the fast passed, highly animated broadcast world of today.  There is an extensive video archive of Matias’ past reviews, interviews, and other work in the Northern California on the “vault” page found at: www.mabhollywood.com

IN April this year Laurieton's famous art deco cinema, The Plaza, was visited by TV producer Graham McNeice. Mr McNeice is producing a two hour documentary titled Saturday Night at the Movies and The Plaza is set to play a...... Read more